We are fully insured and bonded for your protection and peace of mind Call: 817-439-3065 Serving the greater Fort Worth area and surrounding counties ( Tarrant, Denton, Jack, Johnson, Parker and Wise counties )

Cleburne, TX hit by tornados. The hardest hit areas are near Lake Pat Cleburne and southwest Cleburne according to Cleburne Times-Review. A mile-wide tornado reached 80 mph winds as it passed through the town of Cleburne, TX, the Dallas Morning News reported. Injuries were also reported there, NBC reported. 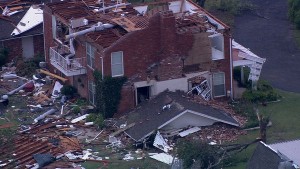 Multiple tornadoes swept through north Texas on Wednesday evening on May 15th, damaging dozens of homes and claiming several lives. At least six people were killed after a twister touched down southeast of Granbury, Texas, a suburb of Fort Worth, Hood County Sheriff Roger Deeds announced in a midnight press conference. Up to 100 more were injured, some critically, The Associated Press reported.

The Granbury neighborhoods of Ranchos Brazos Estates and De Cordova Ranch suffered the brunt of the damage.

Another twister hit about 40 miles west of Fort Worth in the town of Millsap, causing damage to buildings.

The tornadoes developed in the evening out of a system of thunderstorms over the area. Grapefruit-sized hail also pelted the area around Mineral Wells.

When a tragic event happens to homeowners like the recent multiple tornados that recently hit homes in several cities in Texas Wednesday evening, people like storm chasers come out and hit the unsuspicious homeowners with fast roofing services and repair. These storm chasers are the fly-by-night companies who won’t be around to come back later to fix the repairs that they did because of their lack of quality. Their reputation is to get in fast in a tragic situation when the homeowners are feeling devastated and make a quick buck before heading out to the next storm. Towns like Cleburne, Texas got hit hard and the towns like Cleburne will be hit hard again by the storm chasers.

Don’t be a homeowner unaware about storm chasers. Don’t get hit twice. You can depend on and trust Northwest Roofing for all of your roofing and other residential roofing services.

We've Got You Covered in Tarrant County! 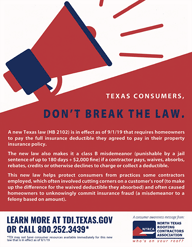 Help For Your Deductible